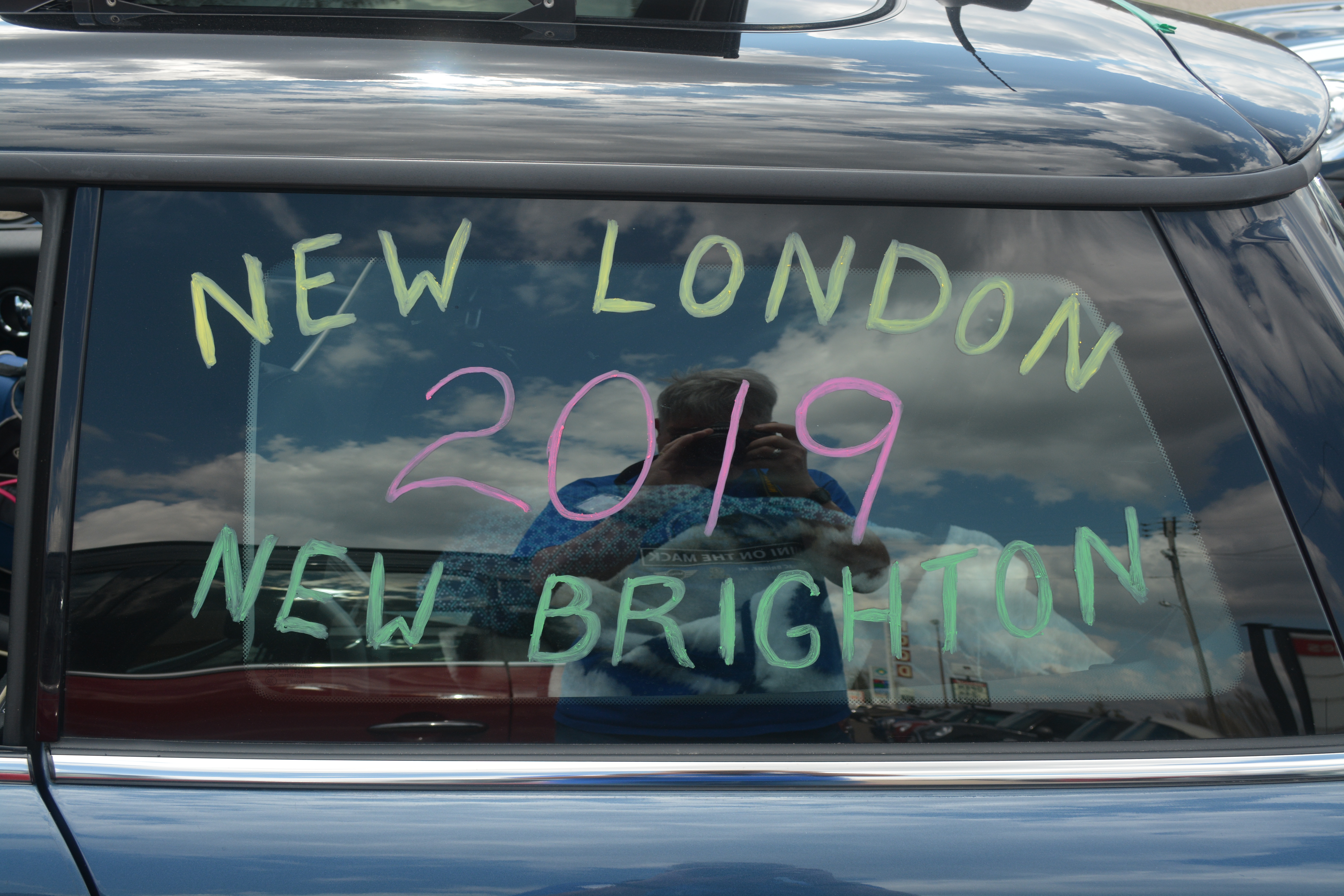 Minnesota United MINIs (M.U.M.) set a World Record on Saturday, May 11, 2019.  Okay, it wasn’t an official record but it broke records for the New London to New Brighton (NL2NB) run.

The event is always a good turnout for M.U.M. and the earlier clubs SotaMINIs (new MINIs) and the Classic Mini club called MMPE&PSHE (the Mini-sota Minis Pizza Eating & Psychiatric Self-Help Association).  However, this year we busted many records.  The event record breaking items included 44 MINIs of all types and colors, 72 people of all ages and best of all – $1,700 raised for Juvenile Diabetes Research Foundation (JDRF).

The day started with a great and tasty breakfast at Hilltop Restaurant in Paynesville, MN provided by Motorwerks MINI. The event was moved further away from New London due to some remodeling being done to our normal starting point.  However, don’t be afraid that we didn’t go through New London because we did.  The parking at the Hilltop Restaurant was interesting with cars parked all over the place and many rows deep!

We left Paynesville and headed through New London to make it an official NL2NB run.  We headed to Darwin, MN to see the largest Twine Ball in the World made by one man, Francis A. Johnson.  He started his obsession in March of 1950 and wrapped for 4 hours every day for 23 weeks.  Again, there were MINIs parked as far as the eye could see (as long as you didn’t look too far!).

After viewing a lot of twine, the route to us to the Spilled Grain Brewhouse in Annandale, MN.  We had one casualty on the way to this stop.  There was a pothole or actually what I thought was a sink hole along the road.  One MINI couldn’t avoid the pothole due to other traffic and blew a tire and bent a rim.  Members tried to assist as we could but it was determined the MINI would have to be towed back to the Twin Cities.  We then moved into Spilled Grain Brewhouse and tasted the various concoctions which were very good.  (Jimmy Jimmy has drone videos and other pictures at https://drive.google.com/drive/folders/1eC-m8iFJgWVNbmUUMGFORwZttlU8fuTR?fbclid=IwAR08N31vaOiZUK9ryRN8Lf83K8oUKsUfSq-loOZPfq8eJxDfVmc5B-EtmhE.)

The final stretch was to Eurotech Auto Service in New Brighton for dinner.  Some followed the official route while others detoured for more a direct route.  I personally love driving the Minneapolis Grand Rounds Scenic Byway System so we took the official route that took us on a lot of that route.  Plus it was nice to see the improvements done to the monuments on Victory Memorial Drive from last year’s WWI anniversary.  The dinner was sponsored by Eurotech and was excellent.  It was followed by the annual NL2NB drawing to raise even more money for JDRF.  Many of the gifts were donated by Motorwerks MINI.

Everyone had a great time on the 2019 NL2NB run even though we had one casualty.  Thank you to Motorwerks MINI and Eurotech Auto Service for sponsoring this event.

This site uses Akismet to reduce spam. Learn how your comment data is processed.

We welcome contributions from any club members.  If you have a story to share, please use the form below to submit your entry.  It will be reviewed by staff and then added to the blog to share with our members.